The Artist is a 2011 French romantic drama directed by Michel Hazanavicius, starring Jean Dujardin and Bérénice Bejo. The film was nominated for six Golden Globes (the most of any 2011 film), and won three: Best Motion Picture – Musical or Comedy, Best Original Score, and Best Actor – Motion Picture Musical or Comedy for Dujardin. It’s currently nominated for ten Academy Awards including Best Picture, Best Director and Best Original Screenplay for Hazanavicius, Best Actor for Dujardin, and Best Supporting Actress for Bejo. It has also been nominated for/won a slew of other awards, but there are just too many to name.

Many “casual moviegoers” are going to be (or already are) skeptical of this film. Why, you ask? It’s a silent black-and-white film, making it a love letter to the olden days of Hollywood. Taking place in Hollywood between 1927 and 1932, it focuses on silent film star George Valentin who was at the top of his career, but then fades into near oblivion as silent film falls out of the limelight and is replaced by talkies, which are emerging in popularity. Valentin is unable  to make the transition due to his stubbornness, which opens up Hollywood to new and fresh young talent, particularly for Peppy Miller, who idolized Valentin. Interestingly, it was Valentin who helped her get her big break. The Artist is a good ol’ rise and fall story, and is beautifully shown through the relationship between the two.

The performances in this film are OUTSTANDING. Jean Dujardin is a shoo-in to win the Oscar come Feb 26th. His ability to portray every kind of emotion humanly possible without saying a single word is AWESOME. It really makes you think about how much acting has changed over the years due to technology. Bérénice Bejo, who (fun fact) happens to be married to the director, Michel Hazanavicius (lucky!!), gives an amazing performance as well, and I will definitely be rooting for her at the Oscars. Did I mention she is stunningly beautiful? There are also many other great members of the cast who you will recognize, as the leads are the only relatively unknown actors in the film. Additionally as a side note, Uggie the dog is AMAZING as well! 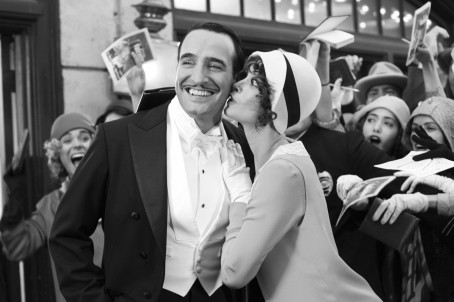 As I mentioned earlier, this film may not sound appealing to the masses because not only is it in black-and-white, but it’s silent as well. Don’t let that fool you. This is a special piece of cinema that EVERYONE can enjoy. The beautiful music, dance numbers, and heartfelt performances will make you feel moved and keep your eyes glued to the screen. You will forget that there is no dialogue. As a major film fan, as much as I wanted to see this film I was afraid that it was going to be over-hyped, but boy was I wrong.

With all that being said I highly suggest you check this film out and see what it is all about. You have been warned though: the film is shot in black-and-white and it is silent. Some people have demanded refunds because they didn’t know this. (Are they living under a rock?) I am happy Michel Hazanavicius followed his dream to make this film. It is a true homage to old Hollywood, and I hope it inspires other storytellers to do the same thing. I know this is a bold statement, but this is one of my favorite movies of all time. Maybe because it’s something different, something original, and from an era I’ve never known, but everything about it spoke to me. I am by no means saying that I only want to see silent films from here on out (as you won’t find a bigger fan of big budget franchise films than me), but boy did I love this piece of film making. The title for this film truly is perfect, as this is “art” at its finest. Nothing will get in this film’s way from bringing home the little gold man!