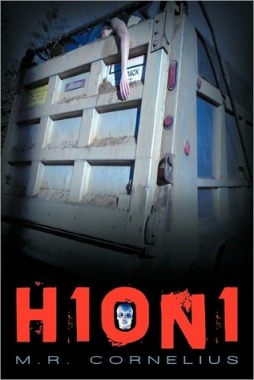 When Kim first asked me to review H10N1 by M.R. Cornelius, I was definitely excited.  Not only was it a book that was a post-apocalyptic thriller, which is right up my alley, but it was also about a deadly strain of the influenza virus.  For those of you who don’t know, I work for a company that researches influenza and is producing a seasonal and pandemic vaccine.  So, not only was I excited to read this book for its genre, but I was also excited because it’s about a subject near and dear to my heart.

The novel begins with the pandemic already in full swing with a fraction of the population alive and holed up in safe areas, attempting to sort the remaining survivors into safe camps and study those infected by the virus.  Dr. Taeya Sanchez is an epidemiologist who currently works at the Army Medical Center in New York, one of a few government-run medical centers left in the country that exists to treat and sort the incoming population into appropriate safe zones, or if necessary, facilitate their disposal if infected.  A problem arises when Dr. Sanchez voices her opinions over the mass euthanization of infected individuals to the facility’s director, and her credentials are revoked.  Fearing that she will be soon fired and left to fend for herself, she prepares to leave the facility, stocked with supplies and medicine, when she runs into Rick DeAngelo.  Rick is one of the facility’s drivers, and convinces her to leave with him in an armored van that he normally pilots for the facility.  Although Sanchez is not the biggest fan of Rick based on her observations of his attitude and demeanor towards her previously, she decides to take him up on the offer and escape with him.  What follows is a tale packed with action and adventure as the pair wind their way towards a farm in Arkansas and then on to a bio-containment dome in Arizona.  Will they be able to find help?  Will they learn to trust each other and put their differences aside?  Will a cure be discovered?

As I’ve said before, the scariest and most intriguing part of post-apocalyptic fiction is the interactions between the survivors.  More than the external threat, whether it’s zombies or a virus or a disease, is the threat of human nature.  When pushed to the limit, there is no telling what lows people will sink to in order to survive.  This is just as true in H10N1, as Sanchez and Rick must fight off attacks from other survivors as they make their way across the country.  Preconceived notions make Rick almost shoot a pregnant woman, and they fend off attacks from gangs hell-bent on attacking them to steal their supplies and vehicle.  These events go to show that the heightened emotions of the situation can make even the most calm and collected individual a completely different person.  Additionally, there isn’t a lot of scientific information about this particular strain of virus (and that’s ok!) because the real threat comes from those around the main characters.  It’s very interesting how survival mechanisms take away most senses of right and wrong in order to protect the individual.  The key is to not let these take over, and to remain human in the face of the horrors that surround everyone.  In doing so Sanchez and Rick maintain their cool and are better off than those frantically trying to survive based on instinct alone.  While I would have liked a little more scientific information about the specific disease (what can I say, I’m a nerd…), the book was a fantastic read from start to finish.  Cornelius really knows how to tell a story, and multiple times I felt as if I were in that van with Sanchez and Rick rolling across America in search of a safe haven.  She really knows how to set the story, the character development is solid, and the plot is well-developed.  I applaud this, her first publication, as a great success, and can only hope to read what else she has in store.  If you’re a fan of Contagion or The Walking Dead, this will be perfect.  Go grab a copy!

Special thanks to M.R. Cornelius for sending me my review copy!