I was recently given an opportunity to step away from the types of novels I usually review and review two of Michael Mullin’s TaleSpins Adventures.  Written entirely in verse, Mullin’s TaleSpins Adventures are unique twists on classic fairy tales.  The two that I were given to read were twists on Snow White and the Seven Dwarfs and The Frog Prince.

Written in verse, this is the previously untold story of the previously unknown 8th dwarf, named Creepy. He is banished to the basement for being different and, well, weird. Yet he plays a vital – and of course previously unknown – role in the popular tale of Snow White – whose title character is an intruder Creepy refers to as “the Maid”. (Intended for YA readers and up)

Everyone knows the story of Snow White and the Seven Dwarfs.  Snow White winds up at the house of the seven dwarfs and is subsequently found by the evil Queen and poisoned by eating the Queen’s apple.  If Mullin’s tale is to be believed, Snow White had a helper who was instrumental in her survival of the Queen’s first two attacks (the poisoned comb and magical shawl).  This “helper” is a quirky, odd, and strange dwarf that’s been locked in the basement due to his weird antics.

Mullin’s 8th dwarf is a fascinating enigma, one with surprising depth.  I really enjoyed the originality of his tale and the surprising twist at the end. Also noteworthy is Mullin’s ability to pen this tale in verse.  There were times when the rhyming and punctuation locations made the speech slightly awkward, but the majority of the work flowed quite well.  This is definitely a fun and fast read that any teen will be sure to enjoy. 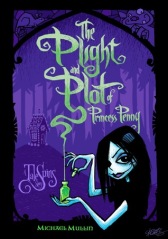 #76 The Plight and Plot of Princess Penny by Michael Mullin – summary from Goodreads:

From the author of “8: The Previously Untold Story of the Previously Unknown 8th Dwarf” comes an original fairy tale about a teenage princess who hires the witch from “The Frog Prince” to get revenge on a Mean Girl at school. (Intended for YA readers and up.)

The humor that Mullin is able to inject into the story makes this tale my favorite of the two.  The writing flows better in this work than it does in 8, which allowed me to enjoy this tale more.  Mullin’s visual style of writing helped me “see” the world he was creating.

Penny and her troll friend Jink were adorable creations.  I really liked the way the story was “youth-enized” and written in a way that its target audience will enjoy.  Mullin has certainly created a fun and inventive way to tell classic fairy tales to a new generation and audience.

Special thanks to Michael Mullin for sending me my review copies!