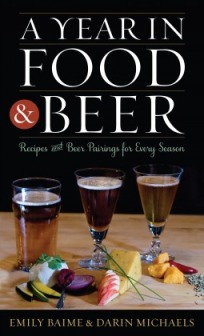 Look!  A post about beer from Todd?  How unexpected?  All joking aside, I got the chance to review A Year in Food and Beer by Emily Baime and Darin Michaels and promptly took it.  I knew that the book mainly focused on beer tasting and food pairing, two subjects which I admittedly knew very little about, despite being a homebrewer for over two years.  So, with a lot to learn, I dove right in.

The book contains a general introduction to beer and tasting in general, covering the major scents and tastes that would be acceptable for different seasons, styles of beer, and foods.  The authors also describe the production of beer, and the different properties of the raw ingredients involved.  They also touch on clean glassware, which is quite important in the beer tasting process.  A main theme in the work is “seasons”, which highlights how different beers are appropriate for different seasons, as well as different foods to pair with these beers.  They then provide a large list of recipes and beer pairings, with an emphasis on the different flavors and smells that are prevalent in that particular season.

From the start, I knew this book would be a great resource for me.  As I admitted before, I had little to no experience with beer pairing, and typically whenever I drink beer with food I find that either the food ends up overpowering the beer or vice-versa.  I’ve come to realize that this is probably due to the fact that I haven’t been pairing correctly.  The authors reference a flavor wheel of sorts that basically functions as a color wheel for food.  Flavors that are in close proximity to each other on the wheel can be paired, and flavors that are completely opposite on the wheel can be paired.  For example, the sweet and rich flavor of a porter could be paired with the crunchy and salty flavor and texture of a pretzel.  On the other hand, the spicy flavors in Indian food can be easily paired with the floral and spicy flavors that are found in most IPA’s.  With this in mind, along with the copious amount of recipes provided, I should have plenty of new ideas to try out when I next pair food and beer together.  I agree with their point that adding food to beer probably increases the enjoyment of it, and it introduces new flavors that would have never existed had it not been for the addition of food.  In short, this is a great read for those of you who are interested in both beer and new foods.  It’s a quick read that definitely goes beyond just a list of recipes.  Cheers!

Special thanks to AltaMira Press for my review copy via Netgalley!