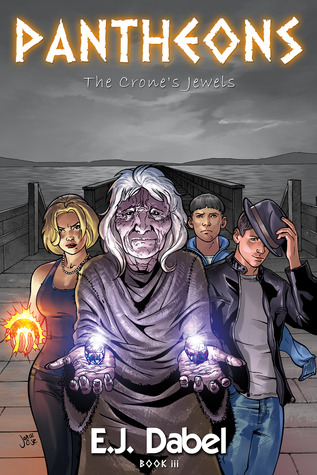 The Godfather 3, Mockingjay, and Scream 3 are all third installments that failed to live up to their predecessors. What is it about the third book or movie that just leads to such disappointment? Was it laziness on the author’s part or was it, as an audience, that we just didn’t care about the series anymore? Whatever the cause, I was hoping that Pantheons: The Crone’s Jewels by E.J. Dabel would break my third installment curse and equal the quality of the first two. Would my 27-year streak continue or would it be broken?

As referenced at the end of the previous book in the series Isaiah made six clones of himself, each of which had to complete a mission. The first clone’s mission is to travel to see Odin, accompanied by Amanda Golden, to get access to the Sleipnir so they can gain access to Taraturs. They do this so they can discover the fate of Cronos after his battle with the Balor of evil. Along the way we are introduced to new gods, hailing from Norse, Aztec, and even Japanese mythology. Through it all, we see the clone constantly tortured by Amanda, who calls him clone and often talks down to him. Will the mission be a success or will they fail to do what Isaiah had set out for them?

I will admit, this installment of the series didn’t grab my attention as quickly as the previous two. Perhaps it’s because I started reading it at the wrong time (in the middle of a very chaotic move, both personally and job-wise), but it took me a few attempts to really get in to this book. However, once I got over the bump of starting over and over, I really did enjoy the story. Once again, Dabel makes you care for the characters. He allows you the emotion of rooting for the underdog and you find yourself happy when something goes in their favor and upset when they are knocked down. I really enjoy that about his writing, because so often you read about characters that seem so distant and clearly fictitious that you can’t root for them. However, in this particular story, you find yourself rooting for Clone 1 to finish his mission and you want to see where the story goes next.

Another thing that I found really interesting about this book was the incorporation of the characters of Thor and Loki. As we’ve seen them in other forms of entertainment as two of the main characters in The Avengers, it was fun to see them in a story containing mythology. I feel that with the comics and the movies, both characters are so watered down with regard to their mythological side.  That being said, I really enjoyed seeing this new side to them. It was almost like watching a movie you love but from a different perspective. Different aspects were highlighted and as the reader I got a better understanding of the characters and more of their history. As a side note, if a movie is ever made of this novel, please do not cast Chris Hemsworth as Thor. He is about as dull as watching paint dry. Tom Hiddleston as Loki can be allowed, because he was pretty awesome in the role.

All in all I am really glad that I saw this book through to the end, as I was really nervous based on my initial reaction to the work. I really enjoyed the other two other books in this series, and I was looking forward to reading this work. I think that it is a little bit slower initially than the first two, but it picks up quickly. I still like the second installment the best so far, but I am glad I continued with this journey and finished up part three. I eagerly await reading part four, which as I saw on Goodreads, will be out in the fall.  Keep your eyes open!

Special thanks to Sea Lion Books for my review copy!

One thought on “Adam’s Review of The Crone’s Jewels (Pantheons #3) by E.J. Dabel”