We’re already at day 5 of the 12 Days of Giveaways! Today’s offer is for Gillian Philip’s entire Rebel Angels series. I’m a huge fan of teen fantasy/adventure novels. Reading about dystopic worlds (Hunger Games), science fiction fairy tales (The Lunar Chronicles), or even adventures in space (Across the Universe) makes me want to run out of my house and go explore something. As a bookseller it’s so much fun to be able to recommend books from this genre and see teens get excited about the newest adventure that they’re about to read. (And seeing them come back in to the store to buy the next books in the series is pretty stellar too.) With that in mind, I hope the Rebel Angel series will excite you about the genre and become a rabbit hole into the genre for you! Giveaway instructions follow the book blurbs.

Firebrand by Gillian Philip – At the end of the sixteenth century, religious upheaval brings fear, superstition, and doubt to the lives of mortals. Yet unbeknownst to them, another world lies just beyond the Veil: the realm of the Sithe, a fierce and beautiful people for whom a full-mortal life is but the blink of an eye. The Veil protects and hides their world…but it is fraying at the edges, and not all think it should be repaired.

Discarded by his mother and ignored by his father, sixteen-year-old Seth MacGregor has grown up half wild in his father’s fortress, with only his idolized older brother, Conal, for family. When Conal quarrels with the Sithe queen and is forced into exile in the full-mortal world, Seth volunteers to go with him.

But life beyond the Veil is even more dangerous than they expected, and Seth and Conal soon find themselves embroiled in a witch-hunt—in which they are the quarry. Trapped between the queen’s machinations at home and the superstitious violence of the otherworld, Seth must act before both of them are fed to the witch-hunters’ fires…

Brimming with intrigue and rebellion, Firebrand is the first book in the Rebel Angels series by Gillian Philip, the Carnegie Medal–nominated author of Crossing the Line and multi-award-nominated Bad Faith.

Bloodstone by Gillian Philip – Bloodstone is the second novel in Gillian Philip’s critically acclaimed Rebel Angels series, debuting in the United States for the first time.

For centuries, Sithe warriors Seth and Conal MacGregor have hunted for the Bloodstone demanded by their Queen. Homesick, and determined to protect their clan, they have also made secret forays across the Veil. One of these illicit crossings has violent consequences that will devastate both their close family, and their entire clan.

In the Otherworld, Jed Cameron, a feral, full-mortal young thief, becomes entangled with the strange and dangerous Finn MacAngus and her shadowy uncles. When he is dragged into the world of the Sithe, it’s nothing he can’t handle until time warps around him, and menacing forces reach out to threaten his infant brother. In the collision of two worlds, war and tragedy are inevitable, especially when treachery comes from the most shocking of quarters…. 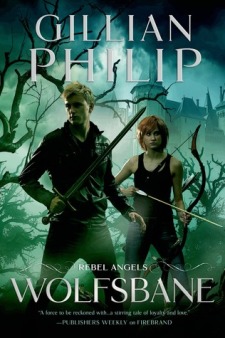 Wolfsbane by Gillian Philip – It’s tough being the foretold savior of your race. Rory MacGregor, kept a virtual prisoner in his own father’s dun and hunted by the Sithe queen, needs a break now and then—and what better fun than tearing the Veil no one else can tear and escaping to the Otherworld?

In that dangerous Otherworld, Hannah Falconer is as trapped by circumstance as the strange wild Sithe boy whose horse nearly kills her. When Rory tricks her into crossing the Veil and entering his world, she’s sure it can’t be any worse than her usual home life.

Meanwhile, Seth MacGregor is fighting to keep his clan safe from the malevolent queen Kate. When an attack comes after years of stalemate, he is shocked to discover who is leading it…and who else is conspiring against him.

Wolfsbane, the third novel in Gillian Philip’s Rebel Angels series is enthralling and suspenseful, with a range of characters appealing to every age. 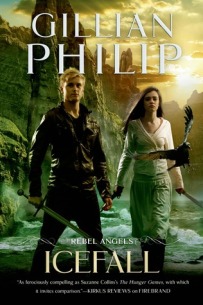 Icefall by Gillian Philip – Death stalks Seth MacGregor’s clan in their otherworld exile. Kate NicNiven is close to ultimate victory, and she is determined that nothing will keep her from it. Not even the thing that took her soul: the horror that lurks in the sea caves. But Kate still needs Seth’s son Rory, and his power over the Veil. And she’ll go to any lengths to get him. Seth’s own soul is rotting from the wound inflicted by Kate, and survival for his loved ones seems all he can hope for. But might a mortal threat to his brother’s daughter force him to return to his own world to challenge Kate? And will Rory go with him? Because Rory suspects there’s a darkness trapped in the Veil, a darkness that wants to get out. But only one Sithe knows how near it is to getting its way: Seth’s bound lover, the witch Finn. Nobody gets forever. But some are willing to try…

From critically acclaimed author Gillian Philip, Icefall is the final installment in the Rebel Angels series.

Giveaway Instructions – (Special thanks to Tor/Forge for our giveaway copies!)

One lucky winner will have the opportunity to win all four books listed above! For your chance to win simply leave a comment below about a character you’d like to take with you on an adventure.  Comments will be accepted through midnight on Thursday, December 31, 2015.  The winner will be picked at random and announced on Friday, January 1, 2016.  Open to US residents only. Good luck!