When I was first asked to join the blog tour for Jane and the Waterloo Map by Stephanie Barron, I was super excited. It’s been a while since I’ve read the other books in the Jane Austen Mysteries series, but I remember loving the idea of Jane Austen as a sleuth. It’s obvious that Jane was observant in real life, as her observations and commentary on the societal events of the day were both astute and very progressive. Therefore it’s not exactly a stretch to think that she would be observant enough to solve mysteries. From the great success that Barron has had so far, it’s clear that many other people agree with me and have loved to see Jane in this new and exciting role. This time we follow Jane as she embarks on an exciting treasure hunt that has very dangerous and real implications. (Below the book blurb and author bio are giveaway instructions so you can win your own copy!)

November, 1815. The Battle of Waterloo has come and gone, leaving the British economy in shreds; Henry Austen, high-flying banker, is about to declare bankruptcy—dragging several of his brothers down with him. The crisis destroys Henry’s health, and Jane flies to his London bedside, believing him to be dying. While she’s there, the chaplain to His Royal Highness the Prince Regent invites Jane to tour Carlton House, the Prince’s fabulous London home. The chaplain is a fan of Jane’s books, and during the tour he suggests she dedicate her next novel—Emma—to HRH, whom she despises.

However, before she can speak to HRH, Jane stumbles upon a body—sprawled on the carpet in the Regent’s library. The dying man, Colonel MacFarland, was a cavalry hero and a friend of Wellington’s. He utters a single failing phrase: “Waterloo map” . . . and Jane is on the hunt for a treasure of incalculable value and a killer of considerable cunning.

Stephanie Barron was born in Binghamton, New York, the last of six girls. She attended Princeton and Stanford Universities, where she studied history, before going on to work as an intelligence analyst at the CIA. She wrote her first book in 1992 and left the Agency a year later. Since then, she has written fifteen books. She lives and works in Denver, Colorado. Learn more about Stephanie and her books at her website, visit her on Facebook and Goodreads.

Win One of Three Fabulous Prizes 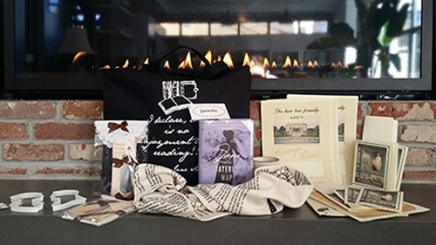 In celebration of the release of Jane and the Waterloo Map, Stephanie is offering a chance to win one of three prize packages filled with an amazing selection of Jane Austen-inspired gifts and books!

To enter the giveaway contest, simply leave a comment on any or all of the blog stops on Jane and the Waterloo Map Blog Tour starting February 02, 2016 through 11:59 pm PT, February 29, 2016. Winners will be drawn at random from all of the comments and announced on Stephanie’s website on March 3, 2016. Winners have until March 10, 2016 to claim their prize. Shipment is to US addresses. Good luck to all!