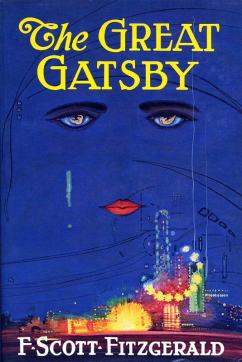 What defines a book as a “must read?” Is it that regardless of how old it is, people still relate to the story or still care about the characters? Or is it that one influential person really liked it and proclaimed it a “must read” and people listened?  One such “must read” (which for me was basically a “to-read” until I saw a movie trailer for it) was The Great Gatsby. Once I saw the trailer for the Baz Luhrmann’s version of The Great Gatsby, I couldn’t believe I had never read the book. It seemed like a giant party set in the context of the roaring 20’s (my favorite time in American history.) The complexity of the story seemed intriguing and I knew I had to check it out from the library. I read it in less than 48 hours and was obsessed with everything about it. I loved the characters, I loved the love story, I loved the symbolism, and I just loved the simple, yet complex feel of the work overall. I was told there was a movie version of it already made, but that it was not a great translation from page to screen. Even so, I wanted to try it out on my own and see if my new favorite novel could become my new favorite movie.

Sadly, for once I have to agree with the critics. From the moment I started watching the movie, I automatically felt a disconnected to it. Lost was the magical world Fitzgerald created, gone were the extravagant parties I wanted a time machine to witness, and sadly, most everything else special about the book seemed to be missing. I just couldn’t believe what I was witnessing. How could this movie have gone so wrong? Francis Ford Coppola, the genius behind the Godfather trilogy, wrote it and was a huge factor in bringing it to the screen. With a cast like Mia Farrow, Robert Redford, and Sam Waterston in the lead roles, the characters should have jumped off the screen and been bought to life. Out of the three main actors, the only one I truly believed in his/her role was Sam Waterston as the narrator Nick Carraway. He was able to portray the every-man really well.

The magic aura and appeal of Gatsby and Daisy were lost in the translation from page to screen. These two characters are pertinent to the story, and if you miscast them you might as well not make the movie, as their story is the heart and soul of the novel/movie. Redford as Gatsby didn’t have any mystery to him. He didn’t seem like someone who was unattainable, and something about his character just was lost. He didn’t have that magic feeling about him, he just seemed like an average Joe with a really nice house. I’m trying to think if it was his acting or if it was just Redford in general, but either way he didn’t seem like the Gatsby I envisioned. When I was reading the novel, all I could think of was a young Warren Beatty or Marlon Brando playing Gatsby. They seem so clouded with mystery that I think they would have effectively portrayed one of the greatest literary characters ever written. Mia Farrow was also horribly miscast as Daisy, the lost love of Gatsby, who in a way is the original Kim Kardashian. She has no responsibility; she goes around from guy to guy, party to party, not caring about anyone’s feelings but her own. Mia Farrow seemed too white bread to play this character. In the book, she’s described as the most beautiful woman in the world, a Greek Goddess. Perfection. I couldn’t help but envision a blonde Natalie Wood or Faye Dunaway playing this character. Someone with a little bit more substance to them, but not Mia Farrow.

One hope I have for the new Baz Luhrmann version is that the magic is ignited and visible throughout the story. There is something so classic about the story, yet it also feels so modern. I think the incorporation of modern music, modern themes, and modern special effects really do the original story justice. I loved Baz Luhrmann’s version of Romeo and Juliet as it was a fresh take on a classic story.  It still had the heart of soul of Shakespeare, but was a new and interesting way to present the story. I am already enjoying the trailers I’ve seen because it seems like they finally got it right. Gatsby seems like that mysterious figure, that person that no one really knows. I really hope Luhrmann is able to keep this mystery alive. Let’s just hope it doesn’t turn out a hot mess like the previous version.

This post is the first in a new series on the blog, Page to Screen! Members of the staff will compare their thoughts on books and their film adaptations.  Check out the first edition with Adam and his thoughts on Abraham Lincoln: Vampire Hunter! 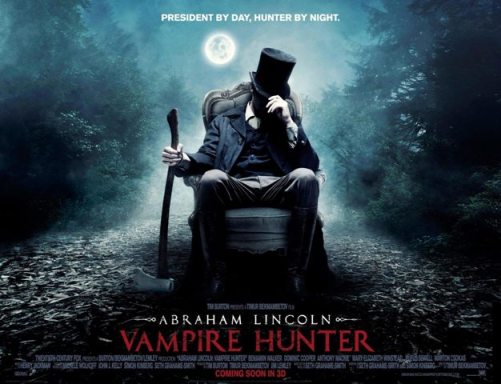 “There has never been a faithful adaptation of a book into a movie.” “You should just read the book and skip the movie.”  These are just some of the things book lovers say regarding many an adaptation of their favorite novels into films. Often times, I feel out-of-place when writing on the blog because I don’t love to read. I am glad Kim still allows me to blog for her despite my proclamation that I’m much more of a film fan than a book fan. About a year ago I read a book I actually enjoyed, Abraham Lincoln: Vampire Hunter by Seth Grahame-Smith. In fact, I enjoyed it so much that I reviewed it for this very website (you can read my review here). A year later a movie version of that book came out, and I went to see it in the hopes of proving or disproving the book lover adage that there is no such thing as a good adaptation from page to film.  First, however, a little history of my experience reading the novel.

One sunny summer day in New York City a miracle happened: I checked a book out from the library! That book of course was Abraham Lincoln: Vampire Hunter, and I read it in about 2.5 weeks (lightening speed for me). I really enjoyed how the story was told, especially how Grahame-Smith intertwined the personal diary of Lincoln, which many people did not know about, with the main plot line. When I found out they were making the book into a movie, I wondered how they would translate this particular aspect of the novel. I originally thought that since the whole story is told through narrative and journal entries, it wouldn’t really translate well to the screen. Fortunately, the first time I saw the full-length trailer my faith was restored. One, it was visually stunning and two, they kept Henry, my favorite character from the book. As I began to visit IMDB more often to search about the movie, I learned that Seth Grahame-Smith co-wrote the script and was also credited as a producer. My faith was fully restored. He wouldn’t butcher his own baby, right?

There were many differences between the film and novel, some of which were for time constraint, while others just wouldn’t translate well. Some characters were taken out of the book: Ann Rutledge, who was Abraham Lincoln’s fiancée before Mary Todd, Edgar Allan Poe, who also hated the vampires and knew of their true evils, and John Wilkes Booth, the man who assassinated Lincoln and knew an important secret about him.

In return for those three characters we added Adam, the main antagonist of the film and a head vampire who wanted the south to break away from the union to create a vampire nation. He added a great conflict to the story, one that was needed to make the film. As much as I loved the book and the inner thoughts of Abraham Lincoln, I don’t think that this alone would’ve translated well. I think the audience would have been bored and not drawn in to the film. Another deviation from the book was how quickly Lincoln begins his quest against vampires. In both the book and the movie, Lincoln witnesses a vampire poisoning his mother, killing her. In the book, shortly after this act he kills the vampire, while in the movie it takes quite a few years to do so. In both the book and the movie, Henry trains Lincoln to kill vampires, but one key fact is revealed at a different point: Henry is a vampire himself. In the book it is revealed shortly after we meet Henry, while in the movie, a rule was created that prevented vampires from killing other vampires: a rule that does not exist in the book. Finally, the ending is also very different, but this is a no spoiler website. Go out and read the book and view the movie for yourself!

Like anything in life, most people don’t like changes. When we go from one big stage of our lives to another, we panic and start holding on to the past. I’m here to tell all you bookies, it’s ok to like the movie version too. Yes it will be different, and yes they may cut out the best scene of inner dialogue because it won’t translate to screen well, but it can still be great! I think if you have faith that the main idea of the book will come across, you can enjoy both the movie and novel. Also, although I rated both the movie and book versions of Vampire Hunter the same, I did like the movie an ounce more, just for the sheer fact that Benjamin Walker (who played Abraham Lincoln) was so badass. Until next time, happy reading and viewing.