Day 1 of the 12 Days of Giveaways is finally here!! Today we’re celebrating the mystery lover. Here at Reflections we love mysteries. (Especially me!) We’ve written reviews for Tasha Alexander, Alyssa Maxwell, Gone Girl, Marie Force, and more. We have three mystery packages (7 books in total!) to offer up to three lucky winners. Giveaway instructions are at the bottom of the post.

Still Life by Louise Penny – Chief Inspector Armand Gamache of the Surêté du Québec and his team of investigators are called in to the scene of a suspicious death in a rural village south of Montreal. Jane Neal, a local fixture in the tiny hamlet of Three Pines, just north of the U.S. border, has been found dead in the woods. The locals are certain it’s a tragic hunting accident and nothing more, but Gamache smells something foul in these remote woods, and is soon certain that Jane Neal died at the hands of someone much more sinister than a careless bowhunter.

Still Life introduces not only an engaging series hero in Inspector Gamache, who commands his forces–and this series–with integrity and quiet courage, but also a winning and talented new writer of traditional mysteries in the person of Louise Penny. 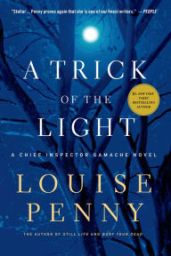 A Trick of the Light by Louise Penny – “Hearts are broken,” Lillian Dyson carefully underlined in a book. “Sweet relationships are dead.”

But now Lillian herself is dead. Found among the bleeding hearts and lilacs of Clara Morrow’s garden in Three Pines, shattering the celebrations of Clara’s solo show at the famed Musée in Montreal. Chief Inspector Gamache, the head of homicide at the Sûreté du Québec, is called to the tiny Quebec village and there he finds the art world gathered, and with it a world of shading and nuance, a world of shadow and light. Where nothing is as it seems. Behind every smile there lurks a sneer. Inside every sweet relationship there hides a broken heart. And even when facts are slowly exposed, it is no longer clear to Gamache and his team if what they’ve found is the truth, or simply a trick of the light.

The Long Way Home by Louise Penny – Happily retired in the village of Three Pines, Armand Gamache, former Chief Inspector of Homicide with the Sûreté du Québec, has found a peace he’d only imagined possible. On warm summer mornings he sits on a bench holding a small book, The Balm in Gilead, in his large hands. “There is a balm in Gilead,” his neighbor Clara Morrow reads from the dust jacket, “to make the wounded whole.”

While Gamache doesn’t talk about his wounds and his balm, Clara tells him about hers. Peter, her artist husband, has failed to come home. Failed to show up as promised on the first anniversary of their separation. She wants Gamache’s help to find him. Having finally found sanctuary, Gamache feels a near revulsion at the thought of leaving Three Pines. “There’s power enough in Heaven,” he finishes the quote as he contemplates the quiet village, “to cure a sin-sick soul.” And then he gets up. And joins her.

Together with his former second-in-command, Jean-Guy Beauvoir, and Myrna Landers, they journey deeper and deeper into Québec. And deeper and deeper into the soul of Peter Morrow. A man so desperate to recapture his fame as an artist, he would sell that soul. And may have. The journey takes them further and further from Three Pines, to the very mouth of the great St. Lawrence river. To an area so desolate, so damned, the first mariners called it The land God gave to Cain. And there they discover the terrible damage done by a sin-sick soul.

(Giveaway copy is a paperback ARC)

Killing Trail by Margaret Mizushima – When a young girl is found dead in the mountains outside Timber Creek, life-long resident Officer Mattie Cobb and her partner, K-9 police dog Robo, are assigned to the case that has rocked the small Colorado town.

With the help of Cole Walker, local veterinarian and a single father, Mattie and Robo must track down the truth before it claims another victim. But the more Mattie investigates, the more she realizes how many secrets her hometown holds. And the key may be Cole’s daughter, who knows more than she’s saying.

The murder was just the beginning, and if Mattie isn’t careful, she and Robo could be next. Suspenseful and smart, Killing Trail is a gripping read that will have readers clamoring for more Mattie and Robo for years to come. Fans of Nevada Barr and C.J. Box will love this explosive debut.

(Giveaway copy is a hardcover ARC) 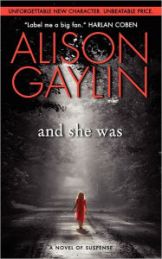 And She Was by Alison Gaylin – On a summer afternoon in 1998, six-year-old Iris Neff walked away from a barbecue in her small suburban town . . . and vanished.

Missing persons investigator Brenna Spector has a rare neurological disorder that enables her to recall every detail of every day of her life. A blessing and a curse, it began in childhood, when her older sister stepped into a strange car never to be seen again, and it’s proven invaluable in her work. But it hasn’t helped her solve the mystery that haunts her above all others—and it didn’t lead her to little Iris. When a local woman, Carol Wentz, disappears eleven years later, Brenna uncovers bizarre connections between the missing woman, the long-gone little girl . . . and herself.

Sweet Revenge by Andrea Penrose – England, 1813: Lady Arianna Hadley’s desire to discover her disgraced father’s murderer has brought her back to London from exile in the Caribbean. Masquerading as a male chef, she is working in one of London’s aristocratic households in order to get close to her main suspect. But when the Prince Regent is taken ill after consuming Arianna’s special chocolate dessert, she unexpectedly finds herself at the center of a dangerous scandal.

Because of his expertise in chocolate, the eccentric Earl of Saybrook, a former military intelligence officer, is asked by the top brass at Horse Guards to investigate the suspected poisoning. But during his first interrogation of Arianna, someone tries to assassinate both of them, and it quickly becomes clear that something very sinister is afoot within the highest circles of government. They each have very different reasons for wanting to uncover the truth, yet to have any chance of doing so they must become allies.

Trust. Treachery. Arianna must assume yet another identity as their search takes them from the glittering ballrooms of Mayfair to the slums of St. Giles. And their reluctant alliance is tested in more ways that one as it becomes clear that someone is looking to plunge England into chaos . . .

The Drowning by Camilla Läckberg  – Christian Thydell’s dream has come true: his debut novel, The Mermaid, is published to rave reviews. So why is he as distant and unhappy as ever?

When crime writer Erica Falck, who discovered Christian’s talents, learns he has been receiving anonymous threats, she investigates not just the messages but also the author’s mysterious past…

Meanwhile, one of Christian’s closest friends is missing. Erica’s husband, Detective Patrik Hedström, has his worst suspicions confirmed as the mind-games aimed at Christian and those around him become a disturbing reality.

But, with the victims themselves concealing evidence, the investigation is going nowhere. Is their silence driven by fear or guilt? And what is the secret they would rather die to protect than live to see revealed?

Three lucky winners will have the opportunity to win ONE of the three packages listed above! For your chance to win simply leave a comment below about a mystery book you’ve read and enjoyed.  Comments will be accepted through midnight on Thursday, December 31, 2015.  The winner will be picked at random and announced on Friday, January 1, 2016.  Open to US residents only.  Good luck!