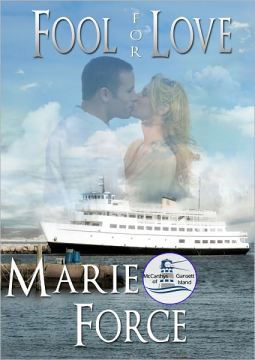 After devouring Maid For Love, book one in Marie Force’s McCarthy’s of Gansett Island series, I knew I had to continue reading about the lives of the Gansett Island folk.  I couldn’t get enough of Force’s fun and witty writing style, so I knew I was definitely in for a treat when I cracked open Fool for Love, the second in the series.

This time, Joe (Mac’s best friend from Maid for Love) is the main interest.  Seeing Mac happy and in love makes Joe’s heart-break, as he is the unfortunate victim of unrequited love.  The object of his desire is Janey, Mac’s younger sister, who is engaged to a medical student living in Boston.  All that changes, however, when Janey finds her fiance in bed with another woman after she travels up to surprise him.  Furious and hurt, she leaves in a hurry only to have her car break down.  She calls the one person she knows will help her: Joe.  She’s always viewed Joe as a “fifth brother” whom she could confide anything in and turn to when times got tough.  Joe jumps at the chance to help Janey, but he is wary of her recent break up, and feels even more pressure when Janey decides to stay at Joe’s to recuperate before she travels back to Gansett Island to tell her family of her break up.  Will Joe be able to handle having Janey, who he’s always admired from afar, so close to him (and single) for the first time?  Will Janey begin to view Joe as more than just a friend?  What will Mac have to say about all of this?

I would normally have thought that the plot of this book was ridiculous, where a girl who has been in a relationship for 15+ years finds out that her boyfriend has been cheating on her, jumps into another man’s arms, and begins a relationship with him in the same night that she discovers the infidelity!  In reality I think that you would need more time in order to get over the shock of this event.  However, Force somehow makes all of this work, and even makes it believable to boot.  Joe’s ability to start this relationship with Janey is never in question, he’s pined over her for ages.  And while at first hesitant and scared of becoming a rebound, he eventually realizes that he may never be able to get another chance to show Janey that he’s the one for her.  Janey, on the other hand, is at first confused and conflicted in her feelings for Joe and what her impetuous behavior says about the relationship she had with David for the past 15 years.  When all of those feelings and emotions the two are feeling come together it is volatile, giving the reader a great story to follow along with.

The way in which Force incorporates the characters from her first work in this series into the plot of this work creates a very close-knit and believable community that ties the works together.  As we read more about the lives of those on Gansett Island, we get a better picture of the goings on in the community as a whole, effectively making the island its own character.  I can’t wait to see what else Force has in store for this series, and I know that once I get to know even more characters from this island I’ll fall in love all over again.