One person has been chosen the winner in the Spooktacular Halloween giveaway!

Thank you to all who participated and left comments!

irit of everyone’s favorite scary holiday, loosely based on Pagan rituals and gifts to spirits that somehow evolved into a candy filled day of wearing costumes (not that anyone’s complaining), I figured we at the blog should do a Halloween-themed giveaway!  As some of you may remember, I previously reviewed two books by Jason Hawes and Grant Wilson, of Ghost Hunters fame (you can read the reviews here and here!)  Now they’re back with another work, Ghost Town!  It’s their second fictional work, with the first being Ghost Trackers.  The ghost hunters Amber, Drew, and Trevor are back in Ghost Town, this time taking place in Exeter, which has the distinction of being “the most haunted town in America.”  They encounter an uprising of the town’s normally quiet ghost population, which is further exacerbated by the ghost of one of their former teammates, who  died years prior and has returned to complicate matters.  It will take all their strength and skill to put these ghosts back in their place and deal with their past at the same time.

So, if this sounds up your alley, leave a comment below telling us about your favorite part of Halloween.  Or, let us know what you’re going to dress up as!

Giveaway – Special thanks to Gallery Books for our giveaway copy!

One lucky winner will have the opportunity to win a paperback copy of Ghost Town by Jason Hawes, Grant Wilson, and Tim Waggoner!  For your chance to win simply leave a comment below.  Comments will be accepted through midnight of Thursday, November 7th, 2013.  A winner will be picked at random and announced on Friday, November 8th, 2013.  Open to US residents only.  Good luck!

So here we are at hour 14.  Our challenge comes to us from Stella Matutina.  We’re supposed to find a picture that captures the essence of the book that we’re reading at this moment.  The book I’m reading, The Ups and Downs of Being Dead by M. R. Cornelius, details the life of a man who has been cryogenically frozen in the hopes that he can be brought back to life in the future.  What he doesn’t realize is that he will essentially exist in limbo in a ghostlike state until he is brought out of the freeze.  This definitely reminded me of the movie Ghost with Patrick Swayze. 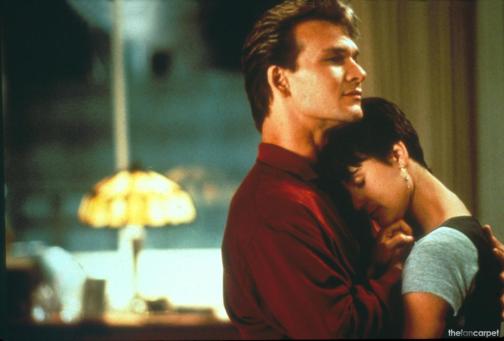