Eight lucky winners have been chosen in the Harry Potter Blogsplosion giveaways!

Congratulations to all the winners!!
Winners: Please contact me with your name and mailing address by August 7, 2011 to claim your prize.  Shipment is to the US and Canada only.
Thank you to all of the participants!

I do hope that you’ve enjoyed the 15 days of posts dedicated to Harry Potter!!!  However, all good things come to an end.  Whomp whomp.  In case you didn’t get a chance to enter all of the giveaways, here is a quick listing and link to them.

All giveaways are open until midnight on Saturday July 30th.  Winners will be announced Sunday, July 31st.   Good luck to all the participants!

I’d like to send out a huge thank you to all my friends who guest blogged over the past two weeks: Adam, Savanna, Sam, Todd, Adam S, Amy, and Zach!  You were wonderful guests and without you the blogsplosion wouldn’t have been as big a success as it was!  I also want to thank  all of you fabulous participants for paying homage to Harry Potter with us here at the blog.  You’re fabulous.

Joining us today is good friend Adam Spunberg.  Adam has done tons of things that I need to mention.  He is the editorial producer at MLBAM, a writer for MLB, associate editor at Picktainment,  co-creator of the Jane Austen Twitter Project, founder of The Potter Games, producer/co-host of the Hunger Games Fireside Chat, and much more! Thanks for the guest post Adam, and welcome to the Reflections family!

When Kim asked me if I would like to write a guest blog on Harry Potter, I was thrilled to help out, but I was even more excited when she told me I could choose which film I wanted to write about.  I’m actually a pretty big fan of all the movies (even Cuaron’s Prisoner of Azkaban has grown on me over the years), but there’s a reason the David Yates-directed Half-Blood Prince was, and has remained my favorite in this wonderful franchise.

The biggest challenge in directing a Harry Potter film is finding some way to effectively keep to the source material and also appeal to the common populace at the same time.  Still, there is plenty of room for artistic liberty: Rowling might describe a wand fight, for instance, but the filmmakers can decide who’s in the fight, what camera angles to use, lighting, positioning, how much time to invest on the scene, etc.  Of all the Potter directors, Yates seems to have the best grasp on finding that balance, and then – once he establishes how loyal he wants to be to the written word – putting a whimsical stamp on the things he can control.

Every scene is deliberated over with such care, whether it be a spectacular two-minute sequence at Fred and George’s joke shop or the waves crashing against the shore when Harry and Dumbledore track down a horcrux.  We also have plenty of the gooey stuff (which I admit, I liked!), with teenage love floating through Hogwarts like pixie dust in the air – as Ron learns, sometimes to his detriment.  Catapulted by a wondrous score from Nicholas Hooper and a plethora of memorable scenes, Half-Blood Prince is simply a delight to watch, even as the conclusion leaves you in shambles. 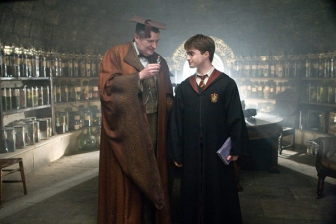 I also should point out what an exceptional addition Jim Broadbent is to the tale, stepping in as the fame-obsessed, slightly unscrupulous Horace Slughorn.  The child leads also seem to have really come of age here, and the rest of the supporting cast – many of them A-List stars – pull their weight with considerable charm.  I’ll be curious to see if Deathly Hallows, Part II can supplant Half-Blood Prince as my favorite Potter movie, but unless those recollections in my pensieve go rotten, it will be a Hagrid-size tall order.  Still, I’m hopeful!

Welcome to the 12th day of the Harry Potter blogsplosion!  Today I’m reviewing the sixth installment of J.K. Rowling’s Harry Potter series: Harry Potter and the Half-Blood Prince.  This time, we follow Harry in his sixth year at Hogwarts as his nemesis Voldemort grows ever stronger. Harry decides that if he is supposed to battle the Dark Lord, he needs to know more about his past in order to survive.  In order to do so, he works with Dumbledore on their most dangerous and far-reaching journey together yet in the series.

The Half-Blood Prince begins slightly differently than the other Potter books, as Harry is picked up from number four, Privet Drive, by Dumbledore himself.  On the way back to Hogwarts, they stop to persuade Horace Slughorn, former teacher of potions at Hogwarts, to return to his post as potions professor.  (Severus Snape is appointed to the role of Defense Against the Dark Arts professor)  Harry attends classes as usual, and receives a used and marked-up version of the potions textbook, previously owned by a student named the “Half-Blood Prince”.  The annotations written in the book allow Harry to excel in potions, causing him to wonder about who this mysterious student was.  Meanwhile, Dumbledore begins asking Harry to join him for special lessons that will supposedly give Harry an edge over his foe when they inevitably battle.  These lessons turn out to be trips into the pensieve to look back on memories that might hold clues to what Voldemort’s weakness is.  It is through these memories that we learn about horcruxes, objects that hold a piece of one’s soul.  Voldemort it seems has made seven horcruxes, and it’s up to Voldemort and Harry to find them.  Can they do it?  Do they have enough information to start their search?

Half-Blood Prince in my opinion is the second darkest book in the entire series.  (I think there is definitely more darkness in Deathly Hallows, but that’s another review).  This book was the only one I’ve read where I didn’t feel some bit of hope at its end.  For those who have not read the book yet, all I will say is that one of the main characters is murdered towards the end.  It’s shocking, heartbreaking, depressing, and terrifying.  Terrifying because for a fleeting second you can finally recognize the strength that Voldemort and his followers have.  In that fleeting second you see no way of beating him and no way of living in a world filled with goodness and love.

Everyone always thinks of magic as this amazing talent/gift that they wish they possessed themselves.  It’s really interesting to see the darker side of it, however.  This book is filled with people being cursed at with death spells, spells that inflict mortal harm, destruction, and finally, death.  The fight between light and dark and good and evil is very pronounced in this novel, and Rowling really brings the world of magic to a whole new level.  She definitely makes the story more realistic by doing this, as she reminds us that there are these forces of evil at work in the world, and we must work tirelessly to make sure that they don’t overcome the light of the world.

Half-Blood Prince is definitely worth the depression you feel upon completion of the novel.  Yes, a main character dies, but it brings the reality of the war that the magical world is facing to the front lines of the plot.  I do hope that you read up to this book in the series, and continue on along to the last book.  Half Blood Prince does an excellent job prepping you for the greatest battle the wizarding world has ever seen.   It’s definitely one you don’t want to miss.

This is my thirteenth completed review for the Page to Screen Challenge
This is my fifth completed review for the Chunkster Challenge
Harry Potter and the Half-Blood Prince by J.K Rowling
Scholastic (2005)
Hardcover 652 pages
ISBN: 9780439784542
Giveaway
One lucky winner will have the opportunity to win a copy of Harry Potter and the Half-Blood Prince (Paperback) by J.K. Rowling.  For your chance to win simply leave a comment in the thread below.  Comments will be accepted through midnight of Saturday July 30, 2011.  Winner will be picked at random and announced on Sunday July 31, 2011.  Giveaway open to US & Canadian residents only. Good luck!!