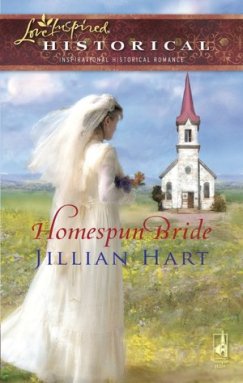 The old saying “true love conquers all” is one we’re definitely familiar with.  Jillian Hart takes it to a whole new level in her inspirational romance, Homespun Bride.  Set on the wide plains of Montana in 1883, we’re treated to a story of adventure, overcoming obstacles, and love that defies all odds.

Noelle Kramer and her Aunt Henrietta are in trouble.  On a routine carriage ride home from town they become stuck in a fast-moving blizzard.  Not only are they alone, but Noelle is blind.  Five years prior, she lost her sight in a carriage accident that took the life of her parents.  She and her Aunt fight their way through the storm, when their horse is spooked by an incoming train (steam locomotives are a new invention at this time) and she is nearly thrown into an icy river by the rearing horse.  Miraculously, she is saved from almost certain death by a strange man who happened upon Noelle and her aunt at the exact time of their accident.  In another twist, this man is no stranger to Noelle.  Thad McKaslin was Noelle’s beau in their younger years, and they even went as far as planning to leave town and elope together.  Sadly, Thad never showed on the proposed night they were set to escape together.  What Noelle doesn’t know is that her father ran Thad out-of-town believing that he was not good enough for his daughter.  How will this sudden turn of events after so much time change the two of them?  Will Thad still have positive memories of Noelle after what occurred?  How will they be able to put the past behind them?

For people who are looking for something wholesome, this is a great fit.  It’s a tale of love, redemption, and forgiveness more than anything else.  Noelle has no idea why Thad left her all those years ago, and has been living under the misconstrued notion that her love for him was inadequate.  Thad, on the other hand, could easily win her back if he told her the real reasons of his departure, but his love for her is so deep that he would not do so in order to protect Noelle’s vision of her parents and the positive memories she has of them.  Noelle and Thad are refreshing changes for this genre because of the abnormal circumstances of the heroine being blind.  Thad is a steadfast character who refuses to accept Noelle’s blindness as a hindrance to any type of future with her.  At times, Noelle’s constant doubts of her own abilities got to me, especially considering the fact that she was very independent despite her blindness.  She is clearly capable of doing many complex tasks, including teaching piano, and is constantly aware of her surroundings.  She doesn’t allow her family to let her be a victim, so it was confusing that she placed no such restrictions on her own thoughts, constantly second guessing her own abilities and skills.  Other than this, Homespun Bride was a tale about love conquering all.  Sweet, romantic, and endearing, this is one romance that will tug at your heartstrings.