When I was first asked to join the blog tour for Jane and the Waterloo Map by Stephanie Barron, I was super excited. It’s been a while since I’ve read the other books in the Jane Austen Mysteries series, but I remember loving the idea of Jane Austen as a sleuth. It’s obvious that Jane was observant in real life, as her observations and commentary on the societal events of the day were both astute and very progressive. Therefore it’s not exactly a stretch to think that she would be observant enough to solve mysteries. From the great success that Barron has had so far, it’s clear that many other people agree with me and have loved to see Jane in this new and exciting role. This time we follow Jane as she embarks on an exciting treasure hunt that has very dangerous and real implications. (Below the book blurb and author bio are giveaway instructions so you can win your own copy!)

November, 1815. The Battle of Waterloo has come and gone, leaving the British economy in shreds; Henry Austen, high-flying banker, is about to declare bankruptcy—dragging several of his brothers down with him. The crisis destroys Henry’s health, and Jane flies to his London bedside, believing him to be dying. While she’s there, the chaplain to His Royal Highness the Prince Regent invites Jane to tour Carlton House, the Prince’s fabulous London home. The chaplain is a fan of Jane’s books, and during the tour he suggests she dedicate her next novel—Emma—to HRH, whom she despises.

However, before she can speak to HRH, Jane stumbles upon a body—sprawled on the carpet in the Regent’s library. The dying man, Colonel MacFarland, was a cavalry hero and a friend of Wellington’s. He utters a single failing phrase: “Waterloo map” . . . and Jane is on the hunt for a treasure of incalculable value and a killer of considerable cunning.

Stephanie Barron was born in Binghamton, New York, the last of six girls. She attended Princeton and Stanford Universities, where she studied history, before going on to work as an intelligence analyst at the CIA. She wrote her first book in 1992 and left the Agency a year later. Since then, she has written fifteen books. She lives and works in Denver, Colorado. Learn more about Stephanie and her books at her website, visit her on Facebook and Goodreads.

Win One of Three Fabulous Prizes

In celebration of the release of Jane and the Waterloo Map, Stephanie is offering a chance to win one of three prize packages filled with an amazing selection of Jane Austen-inspired gifts and books!

To enter the giveaway contest, simply leave a comment on any or all of the blog stops on Jane and the Waterloo Map Blog Tour starting February 02, 2016 through 11:59 pm PT, February 29, 2016. Winners will be drawn at random from all of the comments and announced on Stephanie’s website on March 3, 2016. Winners have until March 10, 2016 to claim their prize. Shipment is to US addresses. Good luck to all!

If you’re a fan of Jane Austen’s Persuasion but prefer your romances to take place in this century, let me tell you about Rosemary Clement-Moore’s novella Passionate Persuasion.

Alex realizes he messed up hugely years ago when he broke up with his college girlfriend Kiara. When life throws the two of them back together years later he knows he has to somehow win her back. Will he be able to repair the damage he did to Kiara’s heart and claim her for his own?

Recently several authors have felt (as I do!) that Mary and Kitty’s stories should be told. These women should be offered the chance to change and grow with proper tutelage to find their own happy ever after. Reina M. Williams is one of these authors, writing Most Truly: A Pride and Prejudice Novella, which gives Kitty a chance to showcase her new maturity while finding love.

I recently reviewed the novella for Austenprose, so for a direct link to my review, click here.

If you’ve ever wondered what Fitzwilliam Darcy of Pride and Prejudice would be like as a pirate wonder no longer. Kara Louise has written a tale that puts Darcy aboard a ship on the high seas, while he pretends to be a well-known pirate captain. How he got there, why he agrees to the ruse, and how Elizabeth reenters his life are just three of the elements of this unique story you need to read about.

Creative, fun, and (at times) laugh-out-loud hilarious, Pirates and Prejudice is a story you’re going to want to get sucked into.

My latest review for Austenprose is Mr. Darcy Came to Dinner by Jack Caldwell. The name Jack Caldwell may ring a bell for some of you. He is the author of Pemberley Ranch, a book that Todd and I both reviewed (see Todd’s/Mine.) Caldwell is one of the few male authors that exist in the Jane Austen fan fiction sphere. As such, he captures my attention with each novel he writes as he is able to offer male insight into Darcy’s mind (and let’s be honest, who wouldn’t want to know what that man was thinking?!)

For a direct link to my review click here.

By now, you guys are well aware of the fact that I binge book series (you’ve read my Series Spotlight posts.) I read one, get hooked, and just have to keep binging.

One of my most recent binge-reads was Maria Grace’s Given Good Principles series. Of the four parts I read, the first two are prequels to Pride and Prejudice, book three re-imagines P&P, while book four is a sequel to P&P. Grace had some pretty ingenious ways of getting the characters to realize what their personality/character flaws were PRIOR to meeting each other.

Jane Austen has given us countless characters to love: Fitzwilliam Darcy, Elizabeth Bennet, Anne Elliot, Captain Frederick Wentworth, Elinor & Marianne Dashwood, and so many others. Sprinkled within the pages of her beloved novels she’s also given us many lesser-known, lesser-developed characters that readers have been able to flesh out and develop with their own imaginations. Author P.O Dixon has decided to take Mary King, “that nasty freckle-faced girl,” who was almost engaged to Wickham in Pride and Prejudice and write her story in Almost Persuaded.  My review of this short novella is my latest post over at Austenprose.

My latest review for Austenprose is on one of the most unique Jane Austen fan fiction novels I’ve ever read, Consequences by C.P. Odom. The beginning of the second half of the book completely blew my mind! Not only was the book surprising in the direction its plot took, but it was written in a way that incited deep emotions while reading.

The book is fabulous and I heartily recommend you check it out!

Mary Lydon Simonsen (one of my favorite authors in the entire Jane Austen Fan Fiction sphere) recently published her newest novel, Another Place in Time. The premise of the novel has Darcy traveling to the future to find an Austen/Regency scholar that will help him in his bid to win the hand of Ms. Elizabeth Bennet. Darcy in modern times and Chris (the Austen/Regency scholar) in Regency times provides the perfect fodder for laughs as well as much soul-searching.

I truly think Another Place in Time is one of Simonsen’s best works to date. For a direct link to my review, click here. 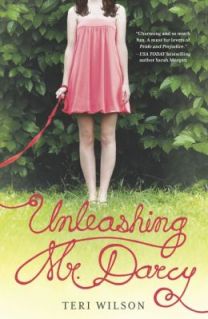 My first Austenprose review for 2014 is now live! I reviewed Unleashing Mr. Darcy by Teri Wilson, which is a contemporary retelling of Pride and Prejudice.

You guys know I love my Pride and Prejudice re-tellings and am always looking for the newest, most creative one out there. Imagine my surprise when I was scouting around NetGalley and discovered Wilson’s version had Darcy as a purebred dog breeder and Elizabeth as a down-on-her-luck teacher turned dog shower.

Sparks really flew in this book, which absolutely captivated and charmed me thoroughly.

For a direct link to my review, click here!