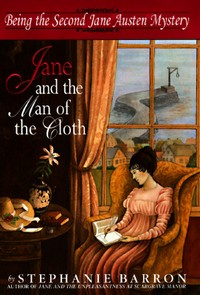 For those of you who have never heard of the Jane Austen mystery series, let me enlighten you.  Stephanie Barron, author of the series, is at a friend’s house when a huge discovery is suddenly made.  A trunk filled with letters and journals belonging to THE Jane Austen is discovered that fills in the details that have been missing about her life, post 1804.  These journals and letters reveal that during her time Jane was a bit of a sleuth, finding mystery and intrigue at her every turn.  Now, we all know that these journals and letters are fake, but imagine if they weren’t?  Imagine being able to read the correspondences that Jane wrote during those missing years?  It’s a pretty clever if you ask me!

Our mystery begins with Jane and her family traveling to Lyme Regis on the Dorset coast to seek cooler temperatures in the harsh summer heat.  Suddenly, the carriage in which they are traveling overturns and Jane’s sister, Cassandra, is injured.  With nowhere else to turn, Jane and her family look for help at the closest estate, known as High Down Grange.  The estate is owned by Geoffrey Sidmouth and his cousin Seraphine LeFevre.  For all their kindness in helping Jane and her family in their hour of need, Jane finds something odd about Mr. Sidmouth and his home.  During her stay at the Grange Austen sees many things that make her question what truly goes on in that household. They remove to their own cottage a few days later and Jane thinks things are back to normal.  Boy is she wrong.  She wakes up one morning to find a man has been hung on make-shift gallows.  This begins to set Jane off on a path of sleuthing, where she tries to find out who this man was, and why he was murdered.  The more that Jane uncovers, the more she finds herself surrounded by smuggling, assassins, and even more murder!  Can Jane get to the bottom of the mystery and find out the true nature of Sidmouth before she becomes too entangled in this dangerous web?

I was sadly disappointed at how long it took Jane and the Man of the Cloth to pick up pace and engage me as a reader.  I devoured the first book in the series and was truly saddened by this one.  I felt like there weren’t enough characters or events to drag me into the story the way Scargrave Manor did.  Scargrave Manor moved at such an excellent pace by inserting multiple murders, threatening notes, multiple wrong accusations, and secret love affairs.  Here, all of the “action” is thrown into the last 100 pages.  It took me forever to get through the monotonous beginning of the novel, and when I finally did, it really took off.  There is one scene where Jane leaves her house in the dead of night and follows smugglers in the dark; my heart was racing the entire time.  If this sense of adventure had permeated through the whole book, I would have been elated.

This series is an incredibly creative idea on Barron’s part; after reading one of the novels in the series it was clear to see that Barron really did her homework not only on Jane, but also about the events of the period.  Jane and the Man of the Cloth is filled with footnotes expanding upon allusions in the text that relate to Austen’s writing of Persuasion or The Watson’s. Not only does Barron make references to Austen’s published works, but to letters or journals that have survived over the years.  The wealth of information provided in the books as well as the style of the writing really does give the illusion that it’s Austen’s hand doing the writing and not Barron.  I think that this has to be the highest praise I can give Barron and the series.  It’s so realistic and characteristic of Austen it’s scary!

If you’re into mystery, and have yet to give the wonderful world of Jane Austen fan fiction a try, this might be the series to introduce you to this wonderful genre!

Author Stephanie Barron’s friends, the Westmorelands of Maryland, find a trunk of letters and journals during a renovation of their estate.  One rainy Saturday, Barron and the Westmorelands begin sifting through all the paperwork, thinking it’s old family documents.  To their surprise it’s journals and letters left behind by the Westmorlands’s distant relative Jane Austen!!  These letters and journals are supposedly the pieces of the puzzle that is Austen’s life post 1801.  It is this fictitious “editor’s note” that sets the tone for Barron’s charming series about a sleuthing Jane Austen.
Scargrave Manor, the first in the Jane Austen mystery series, follows Jane on a trip to Scargrave Manor to visit her newly married friend Isobel Payne.  During Jane’s residency at the manor, a ball is thrown to celebrate the nuptials between Isobel and new husband Frederick, Earl of Scargrave.  It is during the ball that you are introduced to a slew of characters that one can guess have such a lasting effect on Jane that she chose to immortalize their characterizations in her own novels.  Shortly after the Earl toasts his new bride and their guests he begins experiencing pain that unfortunately leads to his untimely end.  Thinking it was just a flare up of his stomach dyspepsia gone awry they begin making arrangements for the Earl’s funeral.  Isobel soon comes to Jane’s room with a mysterious note she received which threatens to go public with her infidelity to the Earl and her part in his murder!

It may plese you to think that you are free of the soupcon, milady, you and the tall lord who is so silent and who looks thru me; but the hanging, it is too good for you.  I must keep myself by the side of my Saviour, and no one is safe in your company; and so I have gone this morning and you shanll not find me out ware.  The next leter, it will go to the good Sir William; and then we will see what becomes of those who kill.

Jane quickly figures out that the note is written by Marguerite, a servant, due to the crude spelling and language.  Jane promises Isobel that she will do everything she can to prove Isobel’s innocence and bring the real killer to justice.  With a house filled with suspects and more murders, it’s up to Jane to figure out the real culprit and motive.

The first time I read this book I didn’t see the little note that the “editor’s note” was really fictitious and I read almost half the book thinking that it really was based on Jane’s lost journals.  (HAHA you can all laugh at me)  This series is one of the most creative Austen fan fiction junctures that I’ve ever had the pleasure of reading.  Barron is truly fantastic at keeping true to Austen’s writing style.  Her writing flows with such eloquence and beauty, it’s hard not to be drawn into the story.

Barron’s characters are remarkably layered.  Just when you think you’ve figured out whodunnit a character begins showing another layer.  Barron writes such a controlled story you really are kept guessing as to who the murderer is until the final pages of the book.  These are the types of mystery books that I love reading;  intelligent ones that are meant to keep you searching for clues and connections the entire time.

There are now 11 books in the series and I cannot wait to gobble them all up.

This is my second completed review for the Historical Fiction Challenge