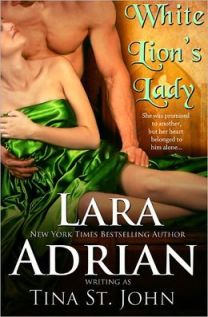 Yesterday was Valentine’s Day. What better way to celebrate (a day late) than reviewing some romance novels?  Last year I became entranced by Lord of Vengeance by Lara Adrian.  How can you go wrong with medieval knights? Seriously, knights fighting with swords over a woman’s honor? What wouldn’t I give to be one of those ladies?  Anyway, I chose to read Adrian’s Warrior Trilogy after Lord of Vengeance because of how fantastic Adrian’s medieval world was.  It was gritty, real, and showcased both the good and bad of that time period. And if I’m being honest, I also wanted more hot knights.

Book one of the trilogy is White Lion’s Lady. Plot summary from Goodreads:

Abducted on the way to her wedding, heiress Isabel de Lamere is unaware that the scoundrel planning to use her for his own gain is the cherished champion of her childhood: Griffin, the White Lion. Yet even as she discovers his treachery, Isabel cannot deny that Griffin lingers in her dreams, awakening the passion in her steadfast heart.

Then a twist of fate puts a price on both their heads, embroiling them in a life-and-death chase that will force Griffin to choose between his own freedom and his fierce desire for the woman who would redeem his noble spirit. But to reclaim his lost honor, the White Lion could lose Isabel forever. . . .

Who doesn’t love a good redemption story?  Griffin was Isabel’s knight in shining armor as a child, saving her from a wild boar in the woods.  From that moment on Isabel believes Griffin will grow to be the most deserving, honorable, and cherished knight there is.  When he kidnaps her off the highway ten years later and holds her  for ransom she quickly wonders what happened to him during the years of their separation.  She wonders how a boy who dwelt so much on doing good turned into this passionless, dark, empty soul of a man.  As she is forced into his company on their long journey to her fiance, she begins to understand more of the hardships he underwent during  their separation and how becoming this calm, calculating man was his way to survive.

To watch Griffin’s transformation back to the man he used to be was in a word, breathtaking.  The way he strives to become a good and honorable man/knight not only for Isabel but for himself too is a journey you won’t want to miss.  I sometimes lose interest in books where characters just change to appease their partners. What is the point of that?  I believe change to be something that should come from your own heart and mind, not those of another.  Because Adrian had Griffin transform mostly for himself  I give this work high marks!

Isabelle, on the other hand, is one of those characters that is literally good down to her bones.  She tries to see positive traits in everyone and always tries to have an optimistic point of view.  At times, this led her into bad situations and it was interesting to see how Adrian portrayed this characteristic in a negative and positive light.  It felt like a realistic approach to the character, and I’m glad that Adrian was able to give us another wonderful character to flesh out her work.  In all, this is one you definitely don’t want to miss. 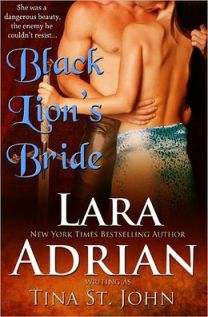 Book two of the trilogy is Black Lion’s Bride.  Plot summary from Goodreads:

Daughter of the King of the Assassins, Zahirah was trained to be as deadly as she is beautiful. When she steals into the desert camp of the English army, she has one goal: to banish the crusaders from her homeland by murdering King Richard the Lionheart. Her deceptive strategy delivers her into the hands of the enemy–and puts her at the mercy of the dashing Black Lion, Sebastian of Montborne.

Fighting for peace in a dangerous, exotic land, Sebastian never dreamed that the tides of war would bring him a mysterious beauty in need of his protection. Nor could he guess that the lady who ignites his heart is the very enemy he has sworn to destroy on behalf of his king. Caught in a deadly game of passion and deception, their unbidden love could cost Sebastian and Zahirah their lives. . . .

Black Lion’s Bride was definitely my least favorite of the three.  It went downhill for me from the start, mainly due to the problems I had with Zahirah’s character. Let’s go through what we know of her. She’s the ONLY female Assassin of her kind and is apparently one of the BEST.  Well of course she’s one of the best. Who else but the best would be given the massive responsibility of assassinating King Richard?  Yet she’s barely able to defend herself, help in an ambush, etc.  Every time the reader is given a chance to witness her abilities, she flails and fails.  While the words say she should be strong and lethal, she comes off as weak and defenseless.  Basically, this made me lose faith in her as a character, and it made my reading experience fall flat.

I found the whole ending of the book to be a bit far-fetched and unbelievable.  Between the outcome of the plot to kill the king and the big secret Zahirah’s been keeping, etc, I was asked to suspend too much disbelief as a reader.  While the details of the book fell flat for me, the writing at its base was still strong. 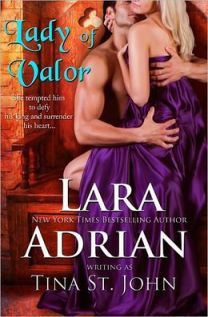 Book three of the trilogy is Lady of Valor. Plot summary from Goodreads:

Left a widow by her cruel husband’s death, Lady Emmalyn of Fallonmour is determined to control her own destiny, until her hard-won vows of independence are threatened by the mysterious warrior sent to protect her castle on order of the king. Emmalyn is now at the mercy of Sir Cabal, a feared knight known as Blackheart.

Skilled at war and hiding a tormented past, Cabal swears allegiance to no one but himself and his country. But once he meets Emmalyn, he finds his strength tested by this proud beauty who stirs his blood with desire, tempting him to defy his king and surrender his heart. . . .

Who doesn’t love a good redemption story?  Cabal has the blackest of hearts and a soul that is as devoid of emotion as a cold winter’s night.  He is the best mercenary and soldier that the King has at his disposal, due to Cabal’s emotionless personality.  When I started reading this book, I had no idea how Adrian would make this character redeemable and worth my time.  As she slowly gives the reader glimpses into his past, he becomes less of a blackened personality and more of a mysterious puzzle.  Emmalyn’s past, on the other hand, is given to us in a rather straightforward way, and her life is an open book.  Her story, most specifically her marriage to her first husband, is devastatingly cruel.  She is a battered woman before the term was ever coined.  Years of psychological and physical abuse took a toll on her and as such, she’s hesitant to trust or reveal her heart to anyone.  These two shells of people battling to become whole once again while struggling to understand new feelings of the heart are wonderful foundations for this work.  This was a great way to end the trilogy, and I’m glad I stuck with it until the end!

This is my fourth completed review for the Historical Fiction Challenge

This is my second completed review for the Color Coded Challenge