Here we are on day 2 of the 12 Days of Giveaways. Today’s package features fiction books! Fiction is such an awesome genre because of its versatility. It can take place anywhere and at anytime. It can be uplifting or sad, it can be quiet and personal, or loud and adventurous. As a bookseller, I’ve yet to find someone that does not like some form of fiction. Personally, historical fiction is one of my favorites, with Outlander being a great example of this sub-genre. Therefore, this giveaway is perfect for almost every reader. Check below the book blurbs to find out how three of you can win one of these great fiction packages!

The Book of Lost and Found by Lucy Foley – Kate Darling’s enigmatic mother–a once-famous ballerina–has passed away, leaving Kate bereft. When her grandmother falls ill and bequeaths to Kate a small portrait of a woman who bears a striking resemblance to Kate’s mother, Kate uncovers a mystery that may upend everything she thought she knew.

Kate’s journey to find the true identity of the woman in the portrait takes her to some of the world’s most iconic and indulgent locales, revealing a love story that began in the wild 1920s and was disrupted by war and could now spark new love for Kate. Alternating between Kate’s present-day hunt and voices from the past, THE BOOK OF LOST AND FOUND casts light on family secrets and love-both lost and found.

(Giveaway copy is a paperback ARC)

This Was Not the Plan by Cristina Alger – From the acclaimed author of The Darlings comes an incisive, hilarious, and tender exploration of fatherhood, love, and family life through the story of a widower who has to become the father he didn’t know he could be.

Charlie Goldwyn’s life hasn’t exactly gone according to plan. Widowerhood at thirty-three and twelve-hour workdays have left a gap in his relationship with his quirky five-year-old son, Caleb, whose obsession with natural disasters and penchant for girls’ clothing have made him something of a loner at his preschool. The only thing Charlie has going for him is his job at a prestigious law firm, where he is finally close to becoming a partner.

But when a slight lapse in judgment at an office party leaves him humiliatingly unemployed, stuck at home with Caleb for the summer, and forced to face his own estranged father, Charlie starts to realize that there’s more to fatherhood than financially providing for his son, and more to being a son than overtaking his father’s successes.

At turns heartbreaking and hilarious, This Was Not the Plan is a story about loss and love, parenthood, and friendship, and what true work-life balance means. 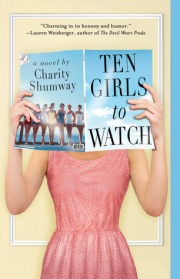 Ten Girls to Watch by Charity Shumway – A radiant debut novel about stumbling through the early years of adulthood; and a love letter to the role models who light the way.

Like so many other recent graduates, Dawn West is trying to make her way in New York City. She’s got an ex-boyfriend she can’t quite stop seeing, a roommate who views rent checks and basic hygiene as optional, and a writing career that’s gotten as far as penning an online lawn care advice column.

So when Dawn lands a job tracking down the past winners of Charmmagazine’s “Ten Girls to Watch” contest, she’s thrilled. After all, she’s being paid to interview hundreds of fascinating women: once outstanding college students, they have gone on to become mayors, opera singers, and air force pilots. As Dawn gets to know their life stories, she’ll discover that success, love, and friendship can be found in the most unexpected of places. Most importantly, she’ll learn that while those who came before us can be role models, ultimately, we each have to create our own happy ending. 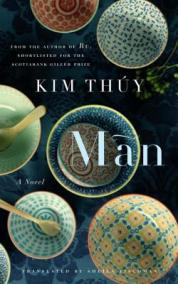 Mãn by Kim Thúy – Following on the Giller Prize-nominated and Governor General’s Literary Award-winning success of Ru, Kim Thúy’s latest novel is a triumph of poetic beauty and a moving meditation on how love and food are inextricably entwined.

Mãn has three mothers: the one who gives birth to her in wartime, the nun who plucks her from a vegetable garden, and her beloved Maman, who becomes a spy to survive. Seeking security for her grown daughter, Maman finds Mãn a husband–a lonely Vietnamese restaurateur who lives in Montreal.

Thrown into a new world, Mãn discovers her natural talent as a chef. Gracefully she practices her art, with food as her medium. She creates dishes that are much more than sustenance for the body: they evoke memory and emotion, time and place, and even bring her customers to tears.

Mãn is a mystery–her name means “perfect fulfillment,” yet she and her husband seem to drift along, respectfully and dutifully. But when she encounters a married chef in Paris, everything changes in the instant of a fleeting touch, and Mãn discovers the all-encompassing obsession and ever-present dangers of a love affair.

Full of indelible images of beauty, delicacy and quiet power, Mãn is a novel that begs to be savoured for its language, its sensuousness and its love of life.

(Giveaway is a hardcover ARC)

The Meryl Streep Movie Club by Mia March – In the bestselling tradition of The Friday Night Knitting Club and The Jane Austen Book Club, three women find unexpected answers, happiness, and one another, with Meryl Streep movies as their inspiration.

Two sisters and the cousin they grew up with after a tragedy are summoned home to their family matriarch’s inn on the coast of Maine for a shocking announcement. Suddenly, Isabel, June, and Kat are sharing the attic bedroom—and barely speaking. But when innkeeper Lolly asks them to join her and the guests in the parlor for weekly Movie Night—it’s Meryl Streep month—they find themselves sharing secrets, talking long into the night . . . and questioning everything they thought they knew about life, love, and one another.

Each woman sees her complicated life reflected through the magic of cinema: Isabel’s husband is having an affair, and an old pact may keep her from what she wants most . . . June has promised her seven-year-old son that she will somehow find his father, who he’s never known . . . and Kat is ambivalent about accepting her lifelong best friend’s marriage proposal. Through everything, Lolly has always been there for them, and now Isabel, June, Kat—and Meryl—must be there for her. Finding themselves. Finding each other. Finding a happy ending.

The Middle of Somewhere by Sonja Yoerg – A troubled, young widow hikes from Yosemite Valley deep into the wilderness on the John Muir Trail to elude her shameful past in this emotionally gripping story from the author of House Broken.

With her thirtieth birthday looming, Liz Kroft is heading for the hills—literally. Her emotional baggage weighs her down more than her backpack, but a three-week trek promises the solitude she craves—at least until her boyfriend, Dante, decides to tag along. His broad moral streak makes the prospect of confessing her sins more difficult, but as much as she fears his judgment, she fears losing him more. Maybe.

They set off together alone under blue skies, but it’s not long before storms threaten and two strange brothers appear along the trail. Amid the jagged, towering peaks, Liz must decide whether to admit her mistakes and confront her fears, or face the trail, the brothers and her future alone.

Giveaway Instructions – (Special thanks to Simon and Schuster, Hachette, Random House Canada, and Penguin for our ARC giveaway copies!)

Three lucky winners will have the opportunity to win ONE of the three packages listed above! For your chance to win simply leave a comment below about a fiction book you’ve read and enjoyed this year.  Comments will be accepted through midnight on Thursday, December 31, 2015.  The winner will be picked at random and announced on Friday, January 1, 2016.  Open to US residents only.  Good luck!