Hello again and welcome to day 9 of the 12 Days of Giveaways! For those of you still playing along, we’re in the home stretch, with only 3 days left to go. Today’s giveaway is for the science fiction / fantasy lover, with two groups of two books each up for grabs. Personally I’ve always found myself to side more with the science fiction half of things, but as I’ve read more I’ve found some great fantasy offerings, such as the Vineart series by Laura Anne Gilman. It’s an easy transition from science fiction to fantasy, just substitute some of the science for mysterious and magical themes and you’re all set. If you’ve yet to get involved with the fantasy genre winning one of the packages below is a great way to get yourself started. Good luck!

Heart of Stone by Debra Mullins – Darius Montana is a Seer. With his gift of empathy, he can see into the hearts of others, both human and Atlantean. When his family comes into possession of one of the legendary power stones of Atlantis, Darius is sent to find the Stone Singer.

Faith Karaluros is the last Stone Singer. Manipulated all her life for her rare ability, she is widowed after her husband tried to steal her power for the Mendukati, an extremist group that hunts Seers. Faith wants nothing more than to stay out of this war when Darius comes to find her—just in time to rescue her from being kidnapped.

Faith goes with Darius, determined to do the job and be on her way with the money that can set her up where no one can find her again. She didn’t count on the Mendukati sending a hit man after her. Darius swears he can protect her, but when she discovers he is one of the rare Atlanteans whose powers work on their own kind, can she trust him to keep his word, or is she being used again?

Warrior of Fate by Debra Mullins – Warrior Adrian Gray has dedicated his life in service to his people, and has never doubted his calling… until now. Three mystical Atlantean power stones were assumed lost for centuries, but one by one the Seers of Atlantis have tracked them down in a tireless race against the extremist Mendukati. Adrian’s mission? To ensure that the stones are acquired and protected by the right people—his people.

Adrian has always been uncompromising in his dedication to the cause. But the True Seer Tessa Montana proves a sensual distraction in his quest, and he soon finds his discipline wavering. Torn between his sacred duty to the Warriors and his desire for Tessa, will Adrian and his secrets cost them the war? 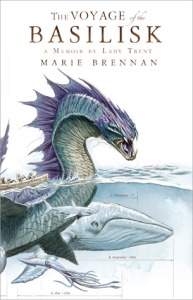 Voyage of the Basilisk by Marie Brennan – Devoted readers of Lady Trent’s earlier memoirs, A Natural History of Dragons and The Tropic of Serpents, may believe themselves already acquainted with the particulars of her historic voyage aboard the Royal Survey Ship Basilisk, but the true story of that illuminating, harrowing, and scandalous journey has never been revealed—until now. Six years after her perilous exploits in Eriga, Isabella embarks on her most ambitious expedition yet: a two-year trip around the world to study all manner of dragons in every place they might be found. From feathered serpents sunning themselves in the ruins of a fallen civilization to the mighty sea serpents of the tropics, these creatures are a source of both endless fascination and frequent peril. Accompanying her is not only her young son, Jake, but a chivalrous foreign archaeologist whose interests converge with Isabella’s in ways both professional and personal.

Science is, of course, the primary objective of the voyage, but Isabella’s life is rarely so simple. She must cope with storms, shipwrecks, intrigue, and warfare, even as she makes a discovery that offers a revolutionary new insight into the ancient history of dragons.

(Giveaway copy is a hardcover) 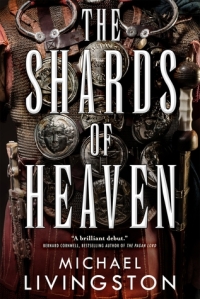 Julius Caesar is dead, assassinated on the senate floor, and the glory that is Rome has been torn in two. Octavian, Caesar’s ambitious great-nephew and adopted son, vies with Marc Antony and Cleopatra for control of Caesar’s legacy. As civil war rages from Rome to Alexandria, and vast armies and navies battle for supremacy, a secret conflict may shape the course of history.

Juba, Numidian prince and adopted brother of Octavian, has embarked on a ruthless quest for the Shards of Heaven, lost treasures said to possess the very power of the gods—or the one God. Driven by vengeance, Juba has already attained the fabled Trident of Poseidon, which may also be the staff once wielded by Moses. Now he will stop at nothing to obtain the other Shards, even if it means burning the entire world to the ground.

Caught up in these cataclysmic events, and the hunt for the Shards, are a pair of exiled Roman legionnaires, a Greek librarian of uncertain loyalties, assassins, spies, slaves . . . and the ten-year-old daughter of Cleopatra herself.

The Shards of Heaven reveals the hidden magic behind the history we know, and commences a war greater than any mere mortal battle.

(Giveaway copy is a hardcover)

Giveaway Instructions – (Special thanks to TOR for our giveaway copies!)

Two lucky winners will have the opportunity to win ONE of the two packages listed above! For your chance to win simply leave a comment below about a science fiction / fantasy book you love and would recommend to others.  Comments will be accepted through midnight on Thursday, December 31, 2015.  The winner will be picked at random and announced on Friday, January 1, 2016.  Open to US residents only. Good luck!