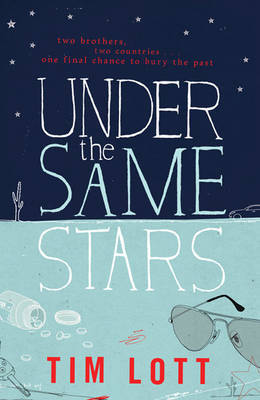 The second kind of book doesn’t know what it is. Very often, it wants to be another type of book so badly but just doesn’t measure up, so it fails at being the book it should be as well as the one it wants to be.

In my opinion, Under the Same Stars falls into the latter category.

It is late summer 2008 and, as the world economy goes into meltdown, forty-year-old Salinger Nash, plagued since adolescence by a mercurial depression, leaves the London house he shares with his girlfriend, Tiane, for his older brother’s home in the Garden District of New Orleans. Carson Nash has persuaded Salinger they should find their missing father, Henry- last known location Las Cruces, New Mexico. But it is with a sense of foreboding that Salinger sets off with his brother. Painfully aware that their own relationship is distant and strained, will dragging up the past and confronting their father going to help or harm them? Meanwhile back in London, Tiane isn’t answering Salinger’s increasingly urgent messages. Why? Tender, funny, unflinching, this is a road trip story in the great American literary tradition and an exploration of sibling rivalry that harks back to Cain and Abel. A vivid glimpse of a Britain’s ‘brother country’ through the eyes of a skeptical outsider, a profound exploration of fraternal love and a gripping journey of the soul.

The story of Cain and Abel is an old one, and has been retold in many, many forms. I think it resonates with us because our human nature, as well as and how we react to jealously, rejection, and guilt, hasn’t really changed and we relate to it still. I think Under the Same Stars wanted to be a thoughtful, literary retelling of the Cain and Abel story, but it feels forced and relies on references to other books to explain itself. It’s one thing to refer to another book, so when Salinger (this book’s version of Abel) picks up a copy of East of Eden (one of the greatest Cain & Abel re-imaginings), I rolled my eyes. But when he then reads a very thoughtful, crucial, and philosophical conversation from East of Eden out loud to Carson (the Cain character), I laughed and immediately wanted to put the book down and re-read East of Eden.

There were a few other things I did not enjoy about this story, namely a horrific act of violence against a dog. I almost did not finish the book after that happened, but I wanted to see if I could understand why the author thought it was necessary to include that bit. Honestly, I understand why it’s there, he’s showing us Cain’s violent side, but I don’t think it served the story and felt it was written for shock value more than anything.

I do believe this book could have been an interesting exploration of America and a good contemporary road trip story, but instead it tried too hard to be too many things and I felt it failed at all of them.

Special thanks to Simon & Schuster UK for my review copy!

Well folks, the first quarter of the year is over.  Wasn’t it just January 1st?  With the first quarter over I feel the need to evaluate where I am on my reading goal.  I need to read 10 books a month to stay on pace for the overall goal of 120 books read.  At the end of March my year-to-date total was 43 books, 13 books ahead of schedule!!  (The 24 books I finished reading in March went a long way in pushing me over the mark).  You can see a full listing of everything I’ve read so far with links to their reviews here. 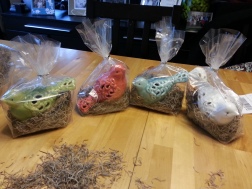 Now that March is over I can tell you what really kept me so busy in February!  My mother turned sixty on March 20th and as such my family threw a surprise party for her at the beginning of March! (She’s too smart to have done it any closer to her actual birthday).  Anyway, her birthday falls on the first day of spring so we decided on a “spring” theme for the party.  I’m still shocked that my sister, aunts, and father were able to pull it off without her finding out.  Anyway, back to the planning!  As the crafty sister, I was placed in charge of the centerpieces, favors, and cake!  Working off the spring theme I bought different colored ceramic birds, Spanish moss, and cellophane bags to make birds in nests for each guest to take home.  I really need to pat myself on the back. They came out great and everyone loved them!  Also, sticking with the spring idea I got these awesome colored flower pots to put fresh flowers in for each of the tables.  Unfortunately, that wound up turning into a disaster because the pots were wider than I thought and the flowers were all over the place and ::sigh:: it was a mess.  I wound up having to stuff wet paper towels into the pots with the flowers to prop them up and keep them hydrated.  It was all worth it though just to see the shocked look on my mom’s face.

I don’t think anything can beat that face. Seriously.  Anyway, we kept busy the rest of the month with visits to my cousin’s house in upstate New York as well as a trip to the vet for Belle and Sebastian.  Our bowling league also finished up the last Thursday of the month and I can happily say I killed it this year!  I finished as the highest scoring female bowler in our league with a high score of 181 (WOO-HOO)!

On the reading front I read a wide variety of genres last month.  Time-traveling, historical fiction, mysteries, romances, graphic novels, and even a few paranormal ones! I definitely covered the entire spectrum this month, and I’m proud to say that I enjoyed every minute!  It’s not every month that I get to be this productive, and I’m happy that I was able to accomplish so many goals in such a short amount of time.   It’s difficult to come up with a top read of the month having read so many different genres, but if I was being forced to pick one I’d have to pick Voyager by Diana Gabaldon.  I quite simply cannot put her Outlander series down.  I have so many reviews forthcoming for all the great books I read in March. I have to say there are not many losers in the bunch.  It was hands down a month full of reading surprises!

Looking forward to April, I can tell you I’m part of a few blog tours for new releases from Michelle Diener (author of In A Treacherous Court) and M.J. Rose (author of  The Book of Lost Fragrances). Todd’s currently reading Resurrection Express by Stephen Romano and How To Plant A Body by Terri Ann Armstrong. Adam’s working on his review of Game of the Gods by E.J Dabel, the second book in Dabel’s Pantheons series. Sam’s review for Three Graves Full by Jamie Mason is going to be posted on the blog in the next few days.  Once that’s posted she’s moving on to Firebrand by Gillian Philip and The Rose Throne by Mette Ivie Harrison.  Jess is reading a biography about Sylvia Plath entitled Mad Girl’s Love Song.  Charlie’s working on an interview with Paul Cornell, author of London Falling and writer for Doctor Who!  And Christine is reading Under the Same Stars by Tim Lott and Over the Rainbow by Paul Pickering.  The staff is doing a fantastic job at keeping this blog well-rounded and full of book selections for all genres and all readers.  My thanks and praise goes out to them!

Until next time, happy reading!