With much of today’s media so dominated by all things electronic and instant, it’s sometimes interesting to think of the ever-growing differences in technology between Austen’s era and today.  A clash between these two worlds is the subject of Karen Doornebos’s latest work, Undressing Mr. Darcy.  I’m no stranger to Doornebos, having read Definitely Not Mr. Darcy previously and was eager to see how she tackled this interesting subject.

Thirty-five-year-old American social media master Vanessa Roberts lives her thoroughly modern life with aplomb. So when her elderly Jane Austencentric aunt needs her to take on the public relations for Julian Chancellor, a very private man from England who’s written a book called My Year as Mr. Darcy, Vanessa agrees. But she’s not “excessively diverted,” as Jane Austen would say.

Hardbound books, teacups, and quill pens fly in the face of her e-reader, coffee, and smartphone

Until she sees Julian take his tight breeches off for his Undressing Mr. Darcy show, an educational “striptease” down to his drawers to promote his book and help save his crumbling estate. The public relations expert suddenly realizes things have gotten personal. But can this old-fashioned man claim her heart without so much as a GPS? It will take three festivals filled with Austen fans, a trip to England, an old frenemy, and a flirtatious pirate re-enactor to find out.

As expected, Doornebos writes yet another fabulously witty and adorable novel. I’m always impressed with the extent of growth her heroines show, and Vanessa in Undressing Mr. Darcy didn’t disappoint. Vanessa undergoes a total transformation in these pages, one that I believe was actually a long time coming. I’ve read many criticisms of the book claiming that Vanessa changes for a man, but I find that to be untrue. First: the facts.  1) Vanessa is not really a fan of Austen. When her parents got divorced she moved in with her aunt (the Austen-centric one) and found herself with a jealous sibling. Who was she jealous of you ask? Jane Austen. 2) She is GLUED to all things electronic/social media/etc. She cannot go anywhere without answering emails, tweeting, or texting. Her life has literally become all about her cell phone and laptop. There are other things too, but I really just want to discuss these two points, as they profoundly change over the course of the novel.

So, as to point 1 – the dislike of Austen. Vanessa’s enjoyment of the novel comes from her spending time at the JASNA (Jane Austen society of North America) conference. While she’s attending the event (both as a favor to her aunt and her pro-bono work on Julian’s book) she discovers all of these little hidden oddities in Austen’s works. She discovers the sexual attraction between the lines, the social restrictions of women, and the difficulties relationships faced back in the day. The sessions she sits in on help her discover all of the tongue-in-cheek writing Austen did. I don’t think her new appreciation for Austen was because of a man. I think it happened because she started maturing and growing to appreciate Austen as an author and a woman, not as a jealous sibling.

The 2nd point – her inability to live in the now. When Vanessa encounters Julian, he’s living practically like a Regency gentleman. He doesn’t write email and he hand writes letters. He doesn’t use a cell phone or text, he leaves handwritten notes. Through her dealings/budding friendship with Julian she begins to pay less attention to her tweeting and the like. She begins being present for conversations taking place around her. By the end of the book we discover Vanessa has taken a new approach to life: living. I don’t think she does this BECAUSE of anyone specifically, but because she is maturing and realizing that life is fleeting. Again, it’s due to maturity, not a man.

I truly enjoyed Vanessa’s transformation from young, naive, immature (to a point) workaholic to a confident, successful, endearing, witty woman. The friendships she rekindles and discovers along her journey only help her grow up. For a woman to develop without parents it’s not surprising that she’s a late bloomer. It makes her story more realistic and more understandable.  Doornebos’ writing is a definite stand-out from the crowd of other fiction writers out there. She’s a breath of fresh air, with a story full of twists, turns, and Mr. Darcy. I can’t wait to see what she does next!

Special thanks to Penguin Books for my review copy!

The holidays are always such a crazy time of the year: shopping for gifts, baking holiday treats, decorating the Christmas tree, etc. I feel as though I never have enough time to read and blog as much as I’d like. Instead, I run around like a chicken without its head! This year marks the first time I’ve ever been able to prep while working from home. Hopefully my usual stress level will be lowered and will allow me more reading time. With that dream in mind, here’s what I’m aiming to read this month:

First up is finishing Wedding Cake for Breakfast.  I’ve been reading it on and off throughout the year as I have time. The book, written by several authors, is comprised of short essays on the first year of marriage. I’ve really enjoyed the stories I’ve completed so far and am anxious to finally finish the book. 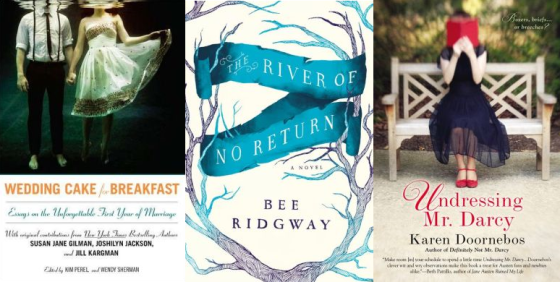 The River of No Return by Bee Ridgway was pitched to me as a book fans of Outlander would love. If you’ve been following the blog this year you know I’ve become obsessed with the Outlander series (reviews of book one, two, and three.) Therefore, it should come as no surprise that I’m PUMPED to start this.

And finally, Undressing Mr. Darcy by Karen Doornebos. Doornebos wrote Definitely Not Mr. Darcy, a book I really enjoyed last year. I’m a firm believer that you can never have too much Darcy, so I’m sure you can guess what my feelings are already about this book. 🙂

So folks, over to you. What are your plans for the holidays? What are you reading this December?